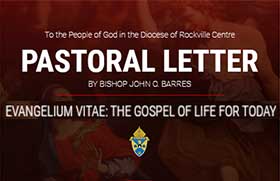 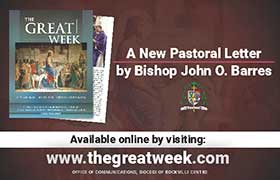 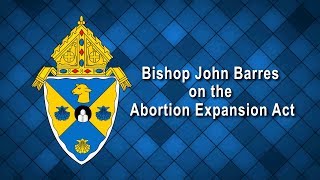 The Most Reverend John O. Barres, S.T.D., J.C.L., D.D., was born on September 20, 1960 and is a native of Larchmont, New York. His late parents, Marjorie (Catchpole) Barres and Oliver Barres (a native of Bethlehem), were Protestant ministers who met each other at the Yale Divinity School, and subsequently converted to Catholicism, entering the Catholic Church in 1955. The story of their conversion is told in Oliver Barres’ book, One Shepherd, One Flock. Bishop Barres is the fifth of six children and has seven nephews and four nieces.

Bishop Barres is a graduate of Princeton University (BA in English Literature), where he played three years of junior varsity basketball during the Coach Pete Carril era, and the New York University Graduate School of Business Administration (MBA in Management). His theological education includes an STB and an STL in Systematic Theology from the Catholic University of America (where he received seminary formation at Theological College), and a JCL in Canon Law and an STD in Spiritual theology from the Pontifical University of the Holy Cross in Rome.

Bishop Barres was baptized by Bishop Fulton Sheen in 1960 while his father was working for the Bishop at the Propagation of the Faith in New York City. He was ordained a priest of the Diocese of Wilmington on October 21, 1989 by Bishop Robert Mulvee. He began his priesthood as an associate pastor at churches in Newark and Wilmington. After further study in Rome, he served as Vice-Chancellor and then Chancellor of the Wilmington Diocese.

Pope John Paul II named him a “Chaplain to His Holiness” in July 2000 with the title of “Monsignor.” Pope Benedict XVI named him a “Prelate of Honor” in November 2005.

Bishop Barres was ordained a Bishop and installed as the fourth Bishop of Allentown by His Eminence, Justin Cardinal Rigali, Archbishop of Philadelphia at the Cathedral of Saint Catharine of Siena in Allentown on July 30, 2009. He was the first priest ordained a bishop within the Diocese of Allentown.

As shepherd of the Diocese, Bishop Barres has initiated a vibrant diocesan-wide
St. Thomas More Society for lawyers, which is very active in local efforts to educate the faithful on the need to protect our religious liberty. He has also established an aspirancy program for young men considering a call to the priesthood. Each summer, the Diocese sponsors Quo Vadis, a weeklong summer camp/retreat for high school age boys who think they may have a vocation. Under the Bishop’s leadership the Diocese has expanded Hispanic ministry to better serve Hispanic people, the fastest growing population group in the diocese.

Recognizing that vibrant parishes make a vibrant Diocese, the Bishop has initiated a pastoral planning process for parishes across the Diocese and called on every parish in the Diocese to establish a functioning Parish Pastoral Council.

The Bishop has supported efforts of pastors, teachers and parents in strengthening Catholic schools. Bishop Barres has also guided the Diocese in its ongoing pastoral and strategic planning which has resulted in cutting edge efforts to enhance pastoral ministries and help to strengthen the financial condition of the Diocese. The Bishop sees the value of social media in spreading the Gospel message and the New Evangelization. He has a video blog on the Diocesan website, opened a twitter account and is working with staff to expand the Diocese’s social media presence.

Nationally, Bishop Barres serves on the USCCB Committee on Evangelization and Catechesis. Since 2013, he has been the USCCB’s Episcopal Liaison to the Pontifical Mission Societies. He also serves on the Board of Trustees at St. Charles Borromeo Seminary outside Philadelphia.

On December 9, 2016, Pope Francis named Bishop Barres as the fifth bishop of Rockville Centre, New York. He was installed on January 31, 2017 in the Cathedral of Saint Agnes.