Queen Margaret of Scotland (1045 – 1093) was by birth an English Princess, grand-daughter of Edmund Ironside. When Edmund died and the English people chose Cnut to be their king, Edmund’s infant sons were sent abroad to the protection of King Stephen of Hungary. One of the twins died young, but the other, Edward Atheling, was brought up as a protégé of Stephen’s Queen, Gisela, and regarded in that foreign Court as the heir to the Anglo-Saxon throne. He married a cousin of Gisela, the Princess Agatha. Their marriage was blessed by one son, Edgar, and two daughters, Christian and Margaret.

Much has been written about the significance of the name, Margaret. It came originally from the Greek, margaron, meaning pearl. For that reason Margaret was sometimes called “The Pearl of Scotland,” to which her biographer, Turgot, comments, “the fairness pre-shadowed in her name was eclipsed in the surpassing grace of her soul.”

When Cnut died in 1035, his sons Harold and Harthacnut reigned for seven years. Then the English determined they must have a king of their own blood, thus paving the way for Edward (afterwards the Confessor) to be chosen. He, too, was an exile, brought up in Normandy under Benedictine influences. Never attracted by worldly things, his palace was more monastery than court. He himself was a virtuous man who protected the kingdom by means of peace rather than violence. The ruling of an earthly kingdom, however, was of little interest to him. Having vowed to live in virginity, he resolved to bring Edward the Exile and his family back from Hungary in order to secure the succession to the throne of England.

Edward, his wife and three children set out from Hungary in 1054, but whether from natural or sinister causes, Edward died immediately on landing. His widow and three children found themselves again living in dependence at court. Now, however, they were in a position of importance, Edgar being the heir to the throne.

Margaret was about ten years old when she came to England. The impression seems to have been that she was a tall, handsome girl of Saxon type, but the early chronicles were so busy describing the beauty of her nature that they say little about her appearance. We know that she read the Scriptures in Latin, and it is almost certain that she was familiar with the writings of St. Augustine.

During some of these years another prince enjoyed the hospitality of Edward the Confessor. When his father, Duncan, was murdered by Macbeth, Malcolm III of Scotland was sent for safety to the English Court. There he met Margaret, his future wife and Queen.

When Edward the Confessor died, the only direct heirs to the throne of England were Edgar, Margaret, and Christian. According to the law of the land, however, they had no constitutional claim to the throne: Edgar not having been born in England and not being the son of the crowned king, and a princess not being eligible (at that time) to reign in her own right. And so, the people unanimously chose Harold, son of Earl Godwine, to be their king. But William of Normandy, England’s rival across the water, was only biding his time until all his preparations were made. Then, at the Battle of Hastings, Harold was killed.

Upon Harold’s death, Edgar was halfheartedly chosen king (he was a very weak character), but was never crowned. Edgar’s supporters soon saw they had no chance against the well-equipped Norman forces, and so Edgar and the leaders of Church and State waited at Berkhampstead to offer William the Conqueror homage. Seeing the affairs of the English disturbed on every side, and fearing retaliation by his conqueror, the royal family resolved to return to Hungary. They took ship, but a fierce gale drove them northwards forcing their vessel to take shelter in the Firth of Forth. The royal travelers landed in a sheltered bay on the Fifeshire coast, since called St. Margaret’s Hope, where Malcolm, now King of Scotland, hastened to welcome the friends he had known in England.

Margaret was about twenty years old. She would find a primitive style of life at Dunfermline, where the royal residence was located. It was a time of great poverty in Scotland and though the people were nominally Christian, Church life was at a low ebb.

Malcolm was then about forty years old, a widower with one son. He was deeply attracted to Margaret, whose own inclination and upbringing had prepared her for the cloister rather than the throne. It was only after long consideration, yielding to her friends and advisors, that Margaret was married in 1070 at age twenty-four to the King of Scotland. Through the influence she acquired over her husband, she softened her husband’s temper, polished his manners, and rendered him one of the most virtuous kings who have ever occupied the Scottish throne.

What she did for her husband, Margaret also did in a great measure for her adopted country. Though a contemplative by nature, she lived the ordered life of prayer and work taught by St. Benedict, combining the virtues of Martha and Mary in an exemplary fashion. Through her tireless efforts, she reformed both the spiritual and social milieu in Scotland, supported in these endeavors by her devoted husband. She promoted education and religion, made it her constant effort to obtain good priests and teachers for all parts of the country, founded several churches, built hospitals, and cared for the poor. Despite her royal position, she regarded herself merely as the steward of God’s riches, living in the spirit of inward poverty, looking on nothing as her own, but recognizing that everything she possessed was to be used for the purposes of God. The miracle is that the Scots, ever jealous of their liberties, accepted the reforms she introduced! 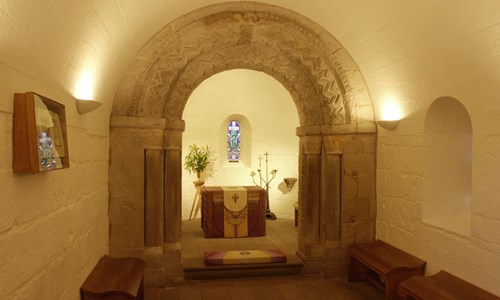 Her charity was unbounded. She thought of her poorest subjects before herself, often feeding orphans, taking in the homeless, and performing other acts of charity. Tradition says that Margaret used to sit on a stone outside the castle so that anyone in trouble might come to her. Another tradition describes a daily custom at Dunfermline in which any destitute poor could come in the morning to the royal hall where the King and Queen themselves would serve provide for their needs. She also had great compassion on the English captives in Scotland, often paying their ransoms and setting them free.

Such a life could not fail to be a power for good, and for centuries Margaret was honored as the ideal of a holy woman who lived in the world. She was a reformer of life and religion rather than the institutional Church. In the process, she improved the standard of living in Scotlandand revived the religious life of the people.

Margaret had eight children, six sons and two daughters. Of the sons, Edward, the eldest, was killed in battle, Ethelred died young, and Edmund “fell away from the good.” But the three youngest sons were the jewels in the crown: Edgar, Alexander, and David are remembered among the best kings Scotland ever had.

It is an interesting fact that of all the saints canonized by the Church of Rome, Margaret stands alone as the happy mother of a large family. It is that image which we use as our parish logo.

Towards the end of her life she and King Malcolm lived in the Castle of Edinburgh, none of which remains with the exception of her little chapel, pictured on the opposite page of this article. It was here that she died, a few days after she heard that her husband and eldest son had been killed in battle. Margaret was not yet fifty when she died.

Though Margaret’s achievements were great, her selfless spirit in which she achieved them was greater still, for the height of perfection and blessedness does not consist in the performance of wonderful works but in the purity of love.

Margaret was canonized in 1250, and was named Patroness of Scotland in 1673. Her feast day had been June 10th, but is presently celebrated on November 16th.

St. Margaret of Scotland, patroness of our parish, pray for us.