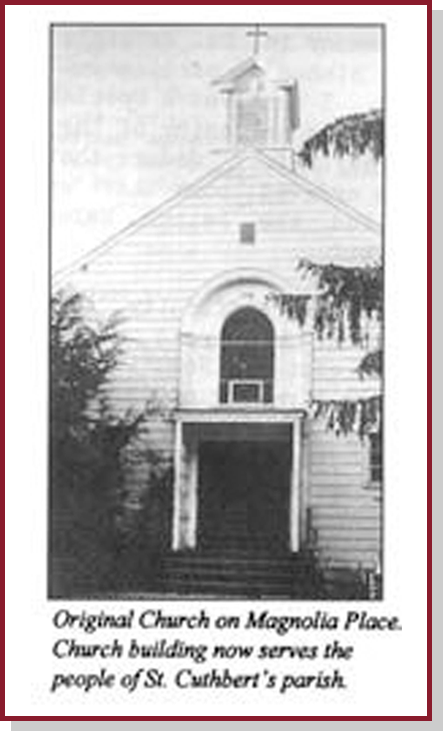 At noon on June 10, 1948 it became official. Bishop Molloy instructed the Reverend Andrew F. Klarmann to begin a new parish in Selden. To most people in the Brooklyn Chancery, Selden was about as far away as anyone could imagine. (Rumor had it somewhere near Riverhead.) There were only a few Catholics in the area designated as St. Margaret of Scotland parish, an area which covered nearly one hundred square miles.

Before its official status was granted, the people of the area were served by priests from St. Joseph’s in Ronkonkoma. Treated as a “mission,” the people celebrated Sunday mass whenever a priest was available. Their so-called “Community House,” the O. L. Schwencke real estate office during the week, served as their weekend chapel. This building, which eventually became the Selden Branch Library, was used for Sunday mass until the church building was completed.

In those days (much like today), a core group of people held on to a dream. Spearheaded by Helen Hagelman (Ginny Galgano’s mother), Jimmy O’Hagan (Peggy Gade’s father), Charlie Schmidt, John Mones, Nicholas Aylward, who ran a grocery store and gas station, and Mrs. Alyward, who served as the area’s Post-Mistress, an organization developed with the expressed purpose of petitioning the Bishop for parochial status. Called “The Catholic Club of Selden,” this group of Catholic pioneers confidently purchased the southern half of the square block bounded on the north by Jericho Turnpike, on the east and west by Evergreen and Magnolia Drives, respectively, and on the South by Oakmont Avenue. It was there that they built the first Church which served as St. Margaret’s primary worship space for seventeen years.

During that time of preparation, the parish was informally and unofficially known as St. Margaret’s. This was due to the dedication of a wealthy local Scotsman who had built a private chapel on Jericho Turnpike (at the top of the hill) for the use of itinerant Jesuits. When Fr. Klarmann became the first pastor, the name, St. Margaret of Scotland, remained. (Interestingly enough, Fr. Klarmann was appointed pastor on June 10th, the actual feast day of St. Margaret of Scotland, whose feast has now been moved to November 16th.)

When the new pastor arrived in the area, he found at his disposal two candlesticks, a crucifix, a movable altar, and a set of green vestments bequeathed by St. Joseph’s parish to its newest sister parish. The first problem Fr. Klarmann had to solve was to find a place live, and a place to celebrate Mass on weekdays. After examining some abandoned barns and chicken coops, it was decided to accept the hospitality of Jimmy and Agnes O’Hagan who managed “Aggie’s Tavern” on the corner of the Turnpike and Magnolia Drive. Behind this tavern was their former residence–an old cement block building which was remodeled to serve as Fr. Klarmann’s residence, a weekday chapel and a “down-town” office. Within a short time he began daily mass in the front room, heard confessions, and conducted office calls. The telephone in the tavern doubled as a rectory phone, so that people who asked how to contact the pastor were simply told, “Call Aggie’s Tavern.”

It seemed that before Fr. Klarmann even got started, however, the small house could no longer adequately serve as a chapel, an office, and his place of residence. And so he rented an apartment with the John Mones family who lived in the hills on Ridgewood Avenue. They provided his evening meal, while Mrs. Alyward, and Fred and Helen Hagelman provided lunch.

Shortly thereafter, arrangements were made for a permanent church on the property originally purchased by the Catholic Club of Selden. Within a year’s time the first masses were celebrated on Palm Sunday, 1949. The rectory across the street was built soon afterwards. 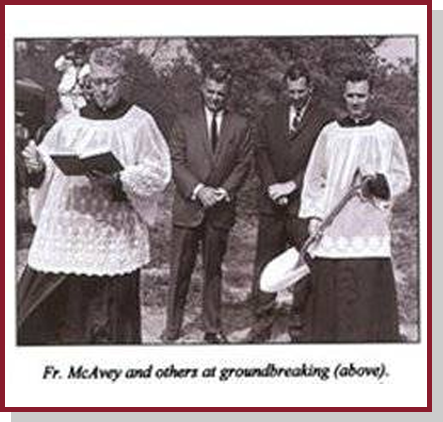 Succeeding Fr. Klarmann, the founding pastor, was Fr. Charles P. Kanzler who came to St. Margaret’s in 1959. Plagued with poor health, the newly assigned pastor offered his suffering and pain for the people assigned to his care. He is remembered as a caring and compassionate individual, ever ready to respond to a person’s need. At the time of his death, Fr. Kanzler was practically immobilized due to blindness and diabetes. He died on January 4, 1963, and was succeeded by Fr. Sylvester J. McAvey on February 9, 1963.

It was during Fr. McAvey’s pastorate that St. Margaret of Scotland parish came to its present location on College Road. Strengthened and encouraged by the faith of the entire parish community while drawing upon twenty-five years of experience serving the parishes of Northport, East Northport, and Elmont, Fr. McAvey shepherded a rapidly growing community. Throughout his pastorate, Fr. McAvey showed tremendous dedication to the people he served. Considerate of all their needs, he worked hard to encourage youth, foster change, initiate new programs, and move the parish towards the exciting period of growth which was yet to come. 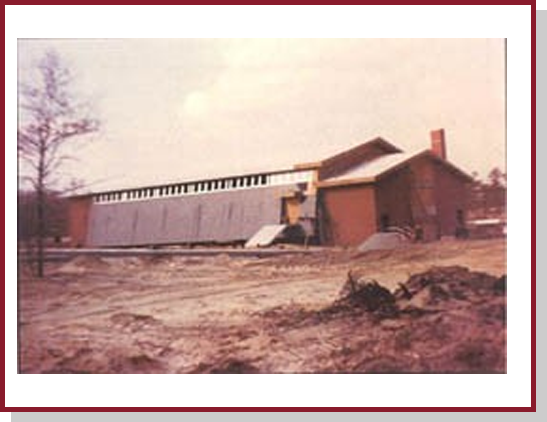 It was Fr. McAvey who moved the parish to its new quarters on College Road, celebrating the first masses on March 6, 1966. It was he who implemented the directives of Vatican II, thus paving the way for further spiritual growth. Beloved by the people, Fr. McAvey was, in a sense, a second founding pastor in that the present parish facility rests on his vision and determination.

After serving for fourteen years, Fr. McAvey passed away in February, 1977. The Bishop assigned Fr. Jeff Madley as temporary administrator. Ordained only two years, Fr. Madley kept the parish on course until the new pastor, Fr. John Mullen, was assigned.

Experienced in many areas, an avid reader, and a progressive educator, Fr. Mullen served the parish with love and compassion. Joined by Fathers Jeff Madley, John Barrett, and Simon Fernando, the parish continued to prosper as the teaching of Vatican II was embraced. The formation of parish councils, liturgy committees, St. Margaret’s Youth Conference, Parish Outreach, etc. were just a few of the many programs which prospered during this time. Religious Education continued to expand as nearly two thousand children a year were instructed in the faith through a well run home-program involving hundreds of parishioners. The participation of the laity, fostered on many levels, became more and more the norm. The growth of the parish during this period could not have been sustained except for the commitment of the many parishioners who willingly shared their faith so others might come to know the Lord.

It was during Fr. Mullen’s pastorate that the parish was blessed by the ordination of several men to the diaconate. To this day these men serve the parish in a variety of ways: celebrating baptisms and weddings, leading the parish in prayer, preaching at the parish’s Eucharistic celebrations, to name just a few of their duties. (Of the original six, Bill Kogler, Biagio Muratore, and Joe Scollan still serve at St. Margaret’s; Bob Gaudioso and Walt Williams were transferred to the new parishes of St. Elizabeth Anne Seton and Resurrection, respectively; and Gino Aceto now serves in Florida. In May, 1993, the parish was blessed by the ordination of Phil Paolicelli to the diaconate.)

In June of 1992, after serving St. Margaret’s for fifteen years, Fr. Mullen entered the glorious realm of retirement, living happily in the parish until his death in 1999. His successor, Fr. Chris Aridas, assigned in 1992 by Bishop McGann as the parish’s fifth pastor, was warmly received by St. Margaret of Scotland’s parish family. It would be his task to lead the parish into the twenty-first century. At that time, no one anticipated the challenges that lay ahead as the parish entered the twenty-first century—changes in family life which decreased the number of volunteers available for parish services, the terrible discovery of sexual abuse within our midst, the decrease in vocations to the priesthood which changed our understanding of ways all are called to minister, and the ever increasing financial strain of living on Long Island, which has made the solvency of families and the financial well being of our parish an ongoing concern.

Despite the struggles, however, the parish continues to remain focused on its mission: “Making Disciples through Prayer, Faith-formation, and Service.” Under Fr. Chris’ pastoral leadership, the parish has developed new ministries and enhanced long-standing ones to meet the needs of the people, especially in the area of faith-formation and the needs of the poor. In addition, the parish’s facilities have been maintained and improved, and our reputation as an active and vibrant parish family has grown. Nothing could be accomplished, however, without the constant generosity, faithfulness, and perseverance of the innumerable parish family members who willingly offer their gifts for the building of the kingdom, thus continuing the hopes and dreams of those Catholic pioneers of sixty years ago who had paved the way toward the future in the Spirit of the risen Lord. In all things, therefore, let us give thanks to the Lord!